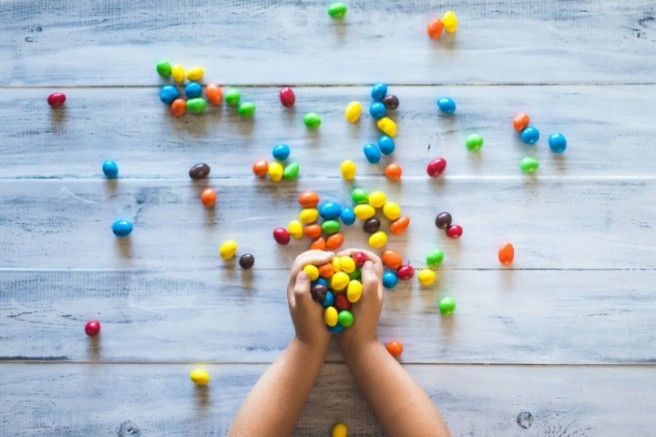 This blog post is an adapted version of a post this week by my friend Sus Schmitt who writes the blog eQuipping for eMinistry (e4e); she gave me permission to extract and apply her post to our TNT community. You can read her full post here.

Jesus taught by example that there are two different ways to relate to people:

As we consider our partners, we have to grapple with these two seemingly conflicting concepts.

So when I talk about principles for prioritizing partners, recognize that I am not talking about the spiritual aspect but rather the practical aspect of effectively managing my time from a support raising perspective. It makes sense for me to invest proportionally more time in the partners who invest more proportionally to our support.

I first learned the principles of prioritizing partners by reading Scott Morton’s excellent book Funding Your Ministry. This goes hand-in-hand with the Annual Plan. (Read Sus’ previous blog post on this too: Seven Ideas for Planning Your Best Year Yet in MPD Communication.)

Sus divides her partners into three groups representing roughly 1/3 of the total giving. In a typical pyramid, the top 1/3 of giving comes from a much smaller number of partners than the middle and bottom thirds. Here is Sus’ example on reaching out to her three levels of partners. She labels her three groups simply as A (top-level), B, and C (bottom-level).

How to Use Your A & B Lists throughout the Year

Try these ideas or something similar:

PHONING (We haven’t implemented this yet.)

In her blog, Sus explains this using another support raising software that does not have TntConnect’s built-in Pyramid Builder (called Campaign Builder).

I can easily divide my partners into three equal groups, equal in the sense of 1/3 of total giving. In the example below, our missionary has about $82,000 in annual giving from 110 donors.

Assuming this was my partner list (it is not), this would show me that the top third of giving to our ministry comes from 11 partners, who gave at least $1,950 in one of the last three years. My next 20 partners gave the second third, and 79 are the final third. I cannot fulfill my ministry without all three groups, but I also cannot invest equal time in all 110.

Putting this plan into action in TntConnect

My three levels constantly change throughout the year (because giving patterns change). But I want to “freeze” my plan to my partners today. So I can convert today’s displayed pyramid to Saved Groups.

I start by pressing the Build Campaign button in the Campaign Builder. This starts a campaign that I will name 2018 Action Plan.

Turns my Campaign into Saved Groups: 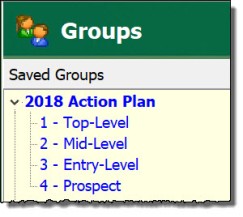 Now I am able to work on my plan of action for each level. 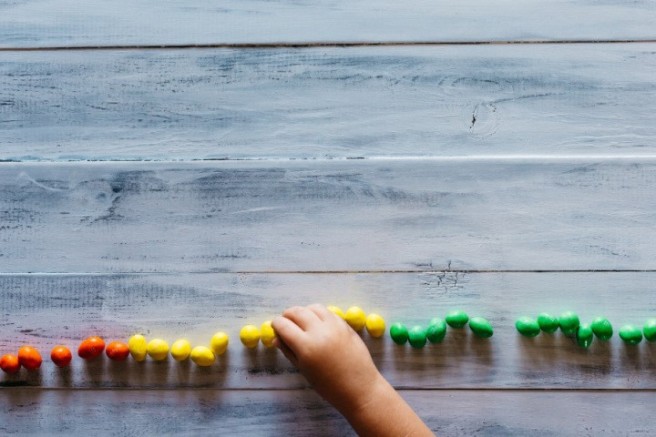 END_OF_DOCUMENT_TOKEN_TO_BE_REPLACED

Here’s something that probably keeps you up at night:

“What should I use, User Fields or Saved Groups?”

I could probably write dozens of posts on the great and subtle nuances of User Fields vs. Saved Groups.

Under the surface, by the way, they are actually the same thing… just a “Tag” that you assign. This tag allows you to filter and sort ad nauseum.

Other software tries to lump all user-defined activity into flat tags. TNT sends that into the stratosphere by the plethora of ways you can sort, filter, group, and export tags, which most other software cannot touch.

In this extra-long post, then, I want to describe a subtle you probably did not know about because it is not obvious. Once you see it, you’ll say, “Where have you been all my life???”

You can make any Saved Group into an Exportable Contact field.

Historically (for the last 10 years at least), one of the primary benefits of User Fields over Saved Groups has been that they could be exported. It’s great to have multiple saved groups, but the only way to export was to lookup the group, then export the contacts... and then in Excel manually notate/sort them. This was awkward, especially if you were comparing membership in multiple saved groups. But that changed this year with this new feature.

Here’s a real world example I was using just yesterday, which is what led me to write this post.

On my team, we do an annual fund-raising event where we invite some of the most generous partners of our ministry.

I can (and do) easily log attendance at these events using the powerful Log History jet engine. But because of the significance of this event (it’s huge to us) and because a number of the guests come multiple times, I needed a better way to manage it. Also, I want to know exactly how many people attend each year… without having to use the History log to count it.

So I created a set of Exclusive Saved Groups that layers the entire event (called “Briefing”), then each year, with attendance underneath. Note in the picture below that I also have separate saved groups for the people who run the event, and the program people (speakers/musicians). 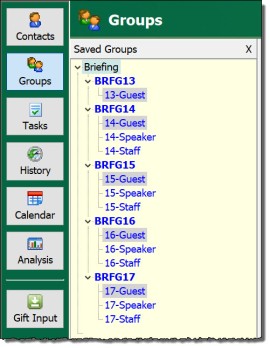 In the set of 19 saved groups, the entire set [labeled “Briefing”, and in black] is not exclusive (meaning any one contact can be in multiple years). But each individual year is exclusive (in blue), so within any given year, a contact must be either in the parent group (e.g., BRFG17) or the nested groups (17-Guest, 17-Speaker, or 17-Staff) but cannot be in more than one.

Note that the “Guest” group each year is shaded. This is the group that is made into a contact field: 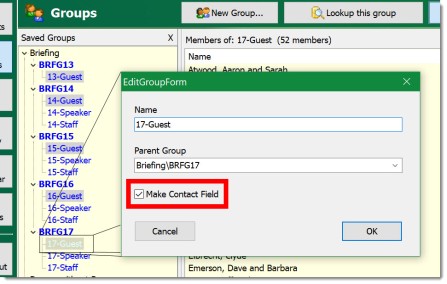 Then in the Contacts View I created a Favourite Lookup (using Lookup | By Group) that will return the list of all contacts who are Guests (this helps me do lookups on the financial commitments and giving as a result of each event). 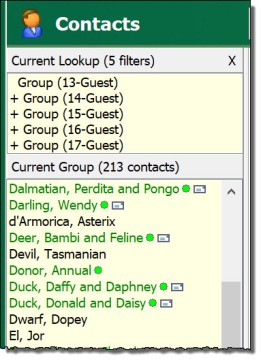 Here’s where the magic happens. I could export this list of contacts, but I run into a problem: We had 290 guests total for all 5 events, but that was actually only 213 people as several have attended multiple years. If I exported the list of 213, I would have no way of knowing which year(s) they attended.

BUT, by making them into Contact fields, I can now export them: 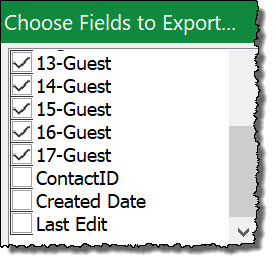 And then I can see the results in Excel, making it VERY easy for me to compare attendees for all years (that is, ‘this contact is a Member of that saved group’).

To reiterate this important tip: Note that TNT alerts me as to which Saved Groups are also Contact fields, by shading them in the Groups list: 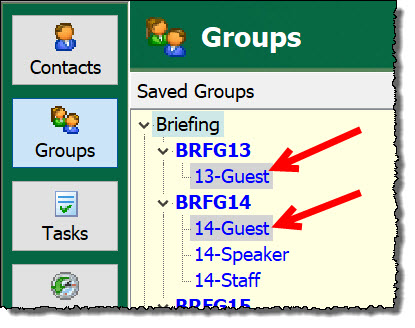 As usual, I have only scratched the surface of how I use this feature. But this “Make Contact Field” feature is something I have used many times this year, and it has been a great addition.

“Bureauracracy” usually brings up images of multiple (and seemingly unnecessary) layers of management.

But in TntConnect, multiple layers are now a good thing.

Previously, you could only have a “Category” with Groups underneath it. You could have neither sub-groups, nor contacts within the Category itself (it was just a label, for ‘grouping groups’).

Now there are no more “Categories”, just a “Parent Group”. And like a real family, a Parent can have children, grand-children, great-grands, etc. 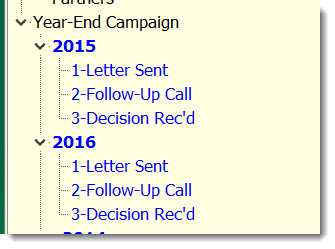 In this example, in previous versions of TNT, “Year-End Campaign” was just a category, but it could have no contacts in it. Now, it is a Group too, and it can have contacts.

When you look at the Groups tab (in the Contacts View), you can see how these same groups are listed. Note that “Exclusive Saved Groups” (where a contact can be in only one of the available groups) stand out with a line above and below the exclusive set. 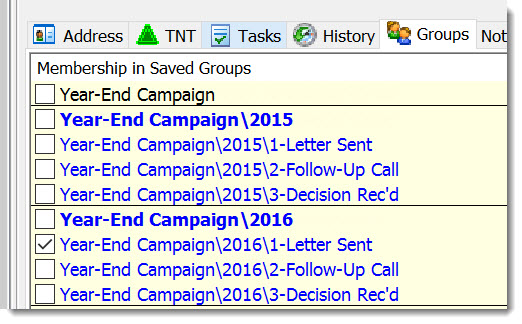 In this example, “Year-End Campaign” is the parent group. It is not exclusive, meaning it can contain contacts that also appear in the sub-groups.

And this example is a common one in sending campaigns. With a year-end campaign, for example, it would be normal to send a letter to all partners each year. But you still want to know (later) which group they were in (e.g., made a follow-up call, decision received, etc.).