Hello and welcome to 2019! When I took a Pause in September, 2018, I had no idea what God had in store for me in the Fall. I mentioned in that post that my life was a bit crazy due to a new donation system we’re rolling out in our ministries around the world (um, next week). I did not know at the time that between then and Christmas I would be in Budapest, London, Paris, and Auckland doing design work on the system.

I confess that simply naming those cities brings a different response than if I say I am going to, perhaps, Bismarck (North Dakota), Peoria (Illinois), Schenectady (New York) or Brandon (Manitoba). While it is my objective to make the most of any place I go to, going to those places without my travel-loving wife is only half as good.

But there is a downside to a busy season like I am going through: My relationships with my ministry partners really suffers.

Since 2002 I have tried to use TNT’s History Log to record all of my interactions with partners. I recently ran a query of my lifetime history in TNT and made a somewhat discouraging discovery: In those 16 years, 2018 was the dead last for my initiations with partners… # of appointments, letters, newsletters, and phone calls (actually phone calls was 15th out of 16, by two calls!).

Clearly I cannot have another year with statistics like that!

In light of that, and in spite of my busy schedule, I have declared 2019 to be my “Year of the Partner”. I made three very simple New Year’s Resolutions just for partnership development:

How am I doing? January just ended and I’ve written 32 thank yous. I had intentionally completed all of my 2018 year-end special gift thank yous before 12/31 to start 2019 with a blank list. I’ve had a handful of “have not thanked in some time” tasks pop up and a few special or annual gifts in January.

Without any pending thank yous in TNT, sometimes I’ve had to be creative: Last week I sent a thank you to the friendly person at Sam’s Club who helped me. This week I sent a co-worker a thank you… in the mail.

(Yes, they are not ministry partners. But I found that when I’m thanking every day, each new TNT thank you task gets completed promptly.)

One time a few years ago I discovered my thanking had plummeted way below normal, and I made a humorous discovery as to why: I had run out of thank you cards! So I have already purchased 200 cards made by a friend who is a professional photographer from some time she spent on the countryside in England. These are timeless, occasion-less photos of thatched roof cottages, doors in brick walls, rowboats in a canal, etc., so they are perfect for any purpose and also gender neutral which is good for a man who writes cards to women and men.

Do I think you should write a thank you every day and a newsletter every month? Not at all. My encouragement to you is to find one or two easily-accomplishable habits to help you just connect and love on your partners this year.

p.s.: As I go into 2019, I would love input from you on what questions I can address in this blog. Send your questions to http://www.tnt.tips@gmail.com and I will try to work them in to future posts.

I was trying to find a specific comment from a note I wrote years ago. I knew the name of the partner, but I could not remember the exact appointment. Was it in 2005 or 2010?

That is to say, I KNOW I talked to Wile Coyote about “Acme Anvils”, but I just cannot remember when.

Fortunately, TntConnect makes it very easy to search through history–not just all history but even for one specific contact. 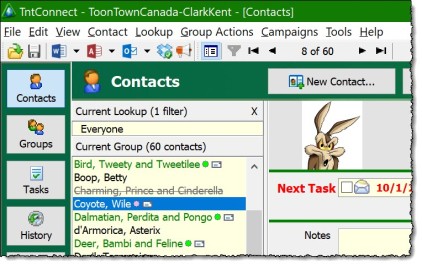 3 & 4. Go to the History View and check the box Filter by Current Group. Notice a blue bar appears that says, “Only items related to contacts in the current group are shown.” In this example, Wile Coyote has no History in the “Last Week”, so the list is blank.

5. Change the Date Range to All

6. Type the desired text in the Text filter. This searches any text in either the Description of the history OR in the actual notes of the logged history. In this case, the words “Acme” are in the notes.

Here is the actual history entry:

The fun thing about this blog post is that I actually did this just this morning before writing this post, which is what gave me the idea for this post. I had to re-create the details for this sample, but I truly did search through my entire database for one specific history event many years ago.

Being able to filter on one contact in the Contacts View (Lookup | This Contact) allows me to do two helpful things:

I felt like a chump after reading an article in The Wall Street Journal last night, realizing that I am “in a whole other league” compared to this guy. Here are the opening paragraphs (Emphasis mine; I cannot link to the article as it requires a subscription login):

POCANTICO HILLS, N. Y.—Some might say David Rockefeller, a scion of America’s greatest fortune and the veteran chief executive of Chase Manhattan Bank, was a dedicated networker long before the age of Facebook.

That would grossly understate his horizons. Mr. Rockefeller recorded contact information along with every meeting he had with about 100,000 people world-wide on white 3-by-5-inch index cards. He amassed about 200,000 of the cards, which filled a custom-built Rolodex machine. He kept the 5-foot high electronic device at his family’s suite of offices in New York City’s Rockefeller Center for about half a century.

“In the annals of CEO history, the breadth and depth of this record of contacts stand out,’’ said Nancy Koehn, a Harvard business professor and historian.  “This is a man with a large, long reach.’’ 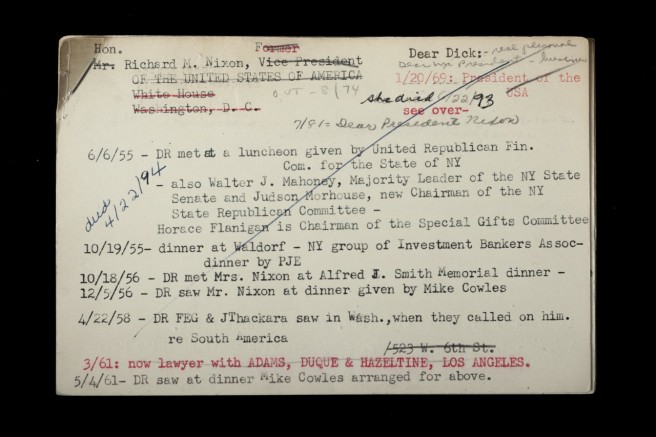 David Rockefeller was the grandson of John D. Rockefeller, but famous in his own right, having served as a primary shareholder and chairman of the board of Chase Manhattan, largest bank in America at the time.

The article explains Mr. Rockefeller’s meticulous record-keeping on the top-secret cards–a vault so secret it was only revealed when he died this year at age 101. His will stipulates the cards may not be fully released for at least 10 more years.

Many of the entries were typed on the cards, with some notations made by hand. Information that was out of date was crossed out.

Most of the seven cards shown in the article (Trump, Reagan, Nixon, Eisenhower, Sadat, Mandela, Gates) have multiple appointments listed. Here are some of items I noticed on some or all of the cards:

Here’s one comment about a visit with Nelson Mandela:

If David Rockefeller had 100,000 people covering 200,000 cards, it is safe to say that the number of data entries must have numbered in the millions. Admittedly, he probably had a personal secretary updating these cards, a luxury I have not had!

I am staggered, yet envious, of this kind of detail. Many times since I started using TNT I have wished that I had kept the records of every support-raising contact and appointment I had. Sadly, like many missionaries I “threw away the card box” [metaphorically; mine was electronic] once I reported to my assignment. Initially I contacted more than 1,000 people on my road to full support, but the vast majority did not make it into TNT because the Excel files were discarded years before TNT came along… remember back when file storage was limited to little plastic disks that held little? “Why would I want to keep this?” I probably asked myself in 1990s.

But I do take heart that since TNT came into my life I have in a very poor emulation done the same thing, and why TNT is also “in a league of its own” in terms of software. My two TntConnect databases have in them 3321 names and (not including data changes) more than 51,000 rows in the history log. And that only represents my last 15 years—less than half of the 31 years I have been raising support for my organization. The very fact I was able to come up with those two numbers (3321 contacts + 51000 history items) in about one minute is evidence of the data-managing power of TNT.

When I joined my organization full-time I was actually trained using an Index Card system quite similar to Mr. Rockefeller’s. Maybe to my detriment, upon returning home I immediately switched to “my own homemade system” (that is, a simple spreadsheet). Yet I know several people today who still maintain their entire partner list on index cards. What a treasure!